The Manager’s Guide to Accountability (without Driving Your Employees Insane) An excuse is a way of promising ourselves we will have that same issue again.

I have a confession. It really bugs me when someone says they’re going to do something—and then they don’t do it.

I’m the type of person, and manager, who takes people at their word and expects them to deliver.

That said, I also live in the real world. So, like all of us managers, I come up against missed deadlines, projects that fall through the cracks, simple tasks that just don’t get done.

In a word, I have to deal with a lack of accountability.

Unfortunately, my employees aren’t my kids. I can’t just tell them what to do, or sit them down for a lecture on keeping commitments. So, what’s the manager to do?

As you’ll know from experience, there are two extremes to how managers react when employees show a lack of accountability. Some managers respond with enforced accountability—they demand to know what happened and take strenuous measures to make sure it doesn’t happen again. The result looks a lot like micromanagement. Not to mention loss of trust.

So what’s the middle way between these? How do you make sure employees do what they say they’ll do without acting like a taskmaster?

Here’s my advice, based on being a career-long accountability stickler who’s dealt with all types of employees.

Accountability Starts with You

If you constantly announce new initiatives that evaporate after a couple of weeks, never to be spoken of again, or say “I’ll send that to you tomorrow” and then send it a week later, good luck having any credibility when you try to build other people’s accountability.

Decades ago, the social psychologist and management professor Douglas McGregor developed what he called Theory X and Theory Y. In short, McGregor felt that many managers ascribed to Theory X, which hypothesizes that people are generally lazy and avoidant when it comes to work. If that’s the manager’s view of the world, he or she is going to spend their time poking and prodding employees to do the work they don’t want to do.

But McGregor proposed a new theory, Theory Y. Theory Y states that people generally want to do good work. A manager with a Theory Y mindset understands that employees will have a natural commitment to their goals at work if they’re given sufficient clarity and control.

If you want to promote a lasting culture of accountability on your team, a Theory X mindset is deadly. It turns you into a hall monitor with a checklist, ready to slap wrists when things aren’t done just so. Instead, operate under the premise that people will generally follow through on their commitments given the right conditions. See it as your job to create the right conditions, not keep your lemmings in line.

Without Clear Expectations, There Can Be No Accountability

Now let’s talk about a couple of those preconditions for real accountability. One is simple clarity on what you expect the employee to deliver—i.e., setting a clear goal. If that sounds basic, consider that one survey found 42 percent of employees naming “unclear goals” as their top stressor at work.

Before you decide to “hold people accountable,” make sure you’re on the same page about what needs to get done in the first place:

1. Give every goal or project a DOD, or Definition of Done. This is a couple of sentences describing what must happen before the item can be called “done.” In many years of managing people and projects, this has been a life saver for me.

2. Make goals achievable. It’s hard to create a culture of accountability when all your employees’ goals are moonshots. A tough goal here and there is good, but it helps people follow through when outcomes and timelines are realistic.

Give Them the Keys to the Project

One overlooked source of motivation comes from the simple concept of ownership. When an employee has authority over something, they’re a lot more likely to stay accountable without constant nudging from you.

When you assign a goal, hand over the keys. Give the employee the latitude and decision rights to make the goal happen in the way they see fit, using you for counsel as needed.

The word accountability has a negative connotation for some people because we think of a Bill Lumbergh boss pestering us for updates (“Are you going to go ahead and have those TPS reports for us this afternoon?”)

Having regular touchpoints is a good practice, but build them into your system so people know what to expect. On my teams, we typically collect all current projects in a tool (like Trello or the forthcoming MGR360 app!), then review them together in a 30-minute weekly meeting. It’s simple, yes, but more effective than bombarding people with unpredictable emails asking where X, Y, or Z is.

Bring It Up, Even When It’s Uncomfortable

Picture this: It’s Wednesday morning, and you haven’t received a certain report Jim said he’d have you on Monday. You know Jim’s been busy. You know he hasn’t finished it. You also know that Jim knows you’re wondering where it is. And you know Jim would probably prefer not to talk about it.

In this scenario, a good manager will follow up with Jim.

Some managers will let the silence stretch on for days, even weeks maybe, not wanting to feel like they’re browbeating their employee. But letting it slide hurts any culture of accountability you’re trying to build. Rather than turning away, follow up with Jim, remind him of his commitment, ask for a revised commitment, and ask if he needs help with other tasks that may be taking up his time.

Tailor Your Coaching to the Employee

Finally, as you create a culture of accountability on your team, you can’t use a one-size-fits-all approach. You have to learn about the unique, individual way each employee works, then tailor how you assign them work, check in with them, and coach them.

For some employees, accountability comes naturally. They set goals they know they can meet and are communicative as soon as something gets in the way.

But others will struggle: They may habitually bite off way more than they can chew. They may prioritize less-important work over the really meaningful goals. They may shirk communication when they miss a deadline.

Treating those two broad categories of employee the same (not to mention the many subcategories) will result in a great percentage of your team being mismanaged. Instead, observe and note the varying tendencies of the humans on your team. Work out how you can help each of the unique people follow through on their commitments, realizing that you’ll have to coach them differently. That’s what we call the Platinum Rule—treating people they want to be treated, not the way you would want to be treated.

No matter what kind of team you manage, accountability is a key driver of performance. As soon as accountability is lost, outcomes start to falter. Then you’re caught in a vicious cycle: People don’t follow through on their commitments, and when you try to set new commitments with people, they don’t take it seriously. Why? Because they know they won’t be held accountable.

Above all, remember that holding your team accountability doesn’t have to involve sticks, whips, and yelling. Think of it instead as a culture that rewards people when they do what they say they will do.

That’s all accountability really is—and it’s the manager’s job to make sure it thrives on their team. Alicia is cofounder and CEO of Manager360. Previously, she brought her leadership, vision, and strategic oversight to many executive positions, including leading programs for eBay/PayPal, Google, and Anheuser-Busch. She is the coauthor, with Joel Trammell, of The Manager's Playbook: Make Exceptional People Management Your Competitive Advantage. 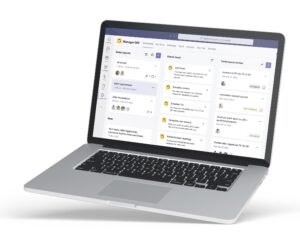 Do We Still Need Managers? An Interview with Peter Klein, PhD Now Is the Time to Build Up Your Leaders